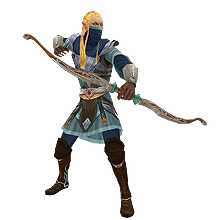 The Shadow Warriors of Ulthuan are the descendants of those who, when the extent of Malekith's betrayal became known, rose against their lord. Since that day they have continued to fight a shadow war against their estranged kin. When the Dark Elves invaded the Blighted Isle during the War of Reckoning it was the Shadow Warriors who bought their beleaguered kin time to mount a defense. In fact if it were not for one in particular, one Korith Bitterborn, word of the surprise assault may not have reached the ears of the High Elf commanders until it was far too late.

Face veiled by a half mask, Korith was among those patrolling the eastern shore of the Blighted Isle when a sorcerous fog rolled in. With knowledge born of long, blood-stained years, Korith and his brethren headed straight for the walls of Calumel and the fight that was to come.

Throughout the battle which ensued, Korith proved invaluable to the town's defense. His black tipped arrows unwaveringly found their marks in the joints and weak spots of Dark Elf armor, felling hundreds of enemies that would otherwise have simply overrun the town's defenders. It was a stalemate that could not last forever.

“This is a war of bitterness and ashes.” - Korith Bitterborn 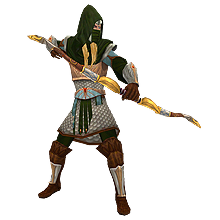 When it became apparent that Calumel would fall, Captain Talorith entrusted Korith with the task of seeing that at least one High Elf messenger survived to warn Prince Tyrion of the Dark Elf invasion. While his fellows remained behind to sabotage the enemy siege weapons and throw dissension into the druchii ranks, Korith led a group of young High Elves into the bleak wilderness of the Blighted Isle. Their passage did not go unnoticed.

A troop of shades was dispatched to intercept them. The ambush that occurred at the Phoenix Gate should have defeated any normal High Elf warrior. But the Dark Elves had not counted on Korith's wrath. With chilling precision he slew the entire troop. Then he mounted their heads atop their own weapons as a warning to others of their kind.

Korith's relentlessness won him the praise of Prince Tyrion himself upon their arrival in Lothern. In an effort to speed the Phoenix King's return to Ulthuan (and, at least in part, to ameliorate the soul-sickness growing in the Shadow Warior's eyes), Prince Tyrion sent Korith to join the High Elf forces aiding the Empire. There Korith found equilibrium among the short-lived race that did not know enough to revile him for his deeds.