Any hint of Clan Eshin is enough to send even the strongest Skaven clan leader into a vicious case of the chitters. Routinely blamed for any series of unexplainable bad luck and suspected of countless assassinations (though no proof has ever been found), it is whispered that Eshin moves as the Council of Thirteen wills.

Ikkrik himself has always been a bit of an enigma. In fact until quite recently there was no verifiable evidence that he existed. Though rumored to have been behind the burning of Talabecland and the poisoning of the river Ost, his most fearsome (supposed) accomplishment was the assassination of the infamous Warlord Varquol. Whether or not this actually occurred is still a matter of great debate in the various clan nests across the world, but what cannot be denied is that the rumor originated somewhere, and no one, neither the Council nor the Eshin clan itself has bothered to naysay the tale.

Ikkrik is a frightening opponent. Between his natural agility and multiple throwing attacks, the Gutter Runner also utilizes Smoke Bombs in order to survive to fight another day.

Due to the paranoid nature of Skaven society as a whole it should hardly come as any surprise that Ikkrik's successful shadow career has had an unfortunate side effect: his own clan doesn't believe he exists. After all, if he were really a flesh and blood rat instead of something summoned up by the Grey Seers or the Council of Thirteen surely someone would have caught more than a flicker of his tail. Someone would know where he dens.

According to the tales told in whispered chitters, Ikkrik dens in a different burrow every night, blending into the furred masses of his brethren without a ripple of discord. It is said that he knows the secret signs of the under tunnels and can travel the length of the under empire in the span of a single night. But according to a very select few, Ikkrik isn't a single Skaven at all, but an identity shared by an elite group of Gutter Runners whose faces are known only to the Grand Nightlord himself.

This explanation is somewhat mollifying to other members of Clan Eshin who find it impossible to believe that a single assassin, no matter how skilled, can simultaneously neutralize targets on the opposite ends of the earth. 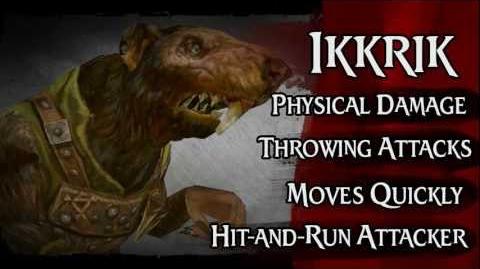