< Glowgob
Edit
watch 01:54
Obi-Wan Finale - The Loop
Do you like this video?
Play Sound 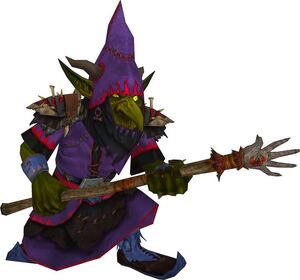 Glowgob da Green - “Wot’s that, Mork? Kill ‘im? I though you was neva gonna ask.”

The name of Glowgob da Green is one which fills other Goblins with dread. To Orcs the name simply means one thing: indigestion. One of the faceless Goblin masses that live among the towering drut piles of Black Crag, Glowgob once seemed destined to the fate of ‘toofpick’ when a large Choppa grabbed Glowgob about the throat and lifted the scrawny git toward his gaping maw. As the Goblin thrashed helplessly in his grasp, Glowgob began to glow. Before long the light was so bright that no trace of Glowgob could be seen at all. The Orc’s response was twofold: he roared in pained outrage and dropped the nearly throttled Goblin. Unfortunately for the Orc his choppin’ days were done; staring directly at the Goblin while he glowed like a captured star burned out the Choppa’s corneas. Ironically it was this blindness that also guaranteed Glowgob’s escape and continued survival. A Big Un quickly grabbed the fleeing shaman and tied him to his tattered battle standard. As long as he keeps the Shaman in scraps and shinies, Glowgob sees to it that the boyz are all right. To this day Glowgob’s grasp of protection magic is spoken of with trepidation by fellow Goblins throughout the Waaagh!