The name of Glowgob da Green is one which fills other Goblins with dread. To Orcs the name simply means one thing: indigestion. One of the faceless Goblin masses that live among the towering drut piles of Black Crag, Glowgob once seemed destined to the fate of 'toofpick'. An Orc by the name of Druk Bashfang grabbed Glowgob by the throat and lifted the scrawny Shaman toward his gaping maw. As the Goblin thrashed helplessly in his grasp, Glowgob began to glow. Before long the light was so bright that no trace of Glowgob could be seen at all.

Druk's response was twofold: he roared in pained outrage and dropped the nearly throttled Goblin. Unfortunately for Druk his choppin' days were done; staring directly at the Goblin while he glowed like a captured star burned out the Choppa's corneas. As Druk stood there howling, a Big 'Un quickly grabbed the fleeing shaman and tied him to his tattered battle standard. As long as he keeps the Shaman in scraps and shinies, Glowgob sees to it that the boyz are alright.

To this day Glowgob's grasp of protection magics is spoken of with trepidation by fellow Goblins throughout the Waaagh!

Even the smallest greenskin warband has its share of Snotlings: pint sized greenskins armed with an animalistic cunning that can turn even a small troop of the diminuitive warriors into an effective killing machine. Though viewed by most as sources of irritation, it is not uncommon for an Orc or Goblin to latch onto a particular Snotling; naming the creature and going so far as to nominally watch over it (even if the reason being given is 'I wuz saving 'im fer later'). Glowgob is no exception.

Grub (as he calls him) the Snotling was the first thing Glowgob saw after being nearly throttled to death by Druk Bashfang. Claiming Grub as his 'Luck Snotling', Glowgob immediately bound and attached the small creature to his hat (ignoring Grub's cries - after all, he wuz just lookin' fer attention).

Over time Grub has proven his worth by alerting Glowgob to incoming arrows, rocks, and in one case an off course doomdiver. But it was not to last. The Snotling's life was tragically cut short by an explosion of Waaagh! magic during the Battle of Crookback Creek. Unpreterbed, the Shaman replaced Grub's eyes with green shinies and bound the Snotling's mummified corpse more firmly atop his favorite hat. After all, four eyez's better'n one. 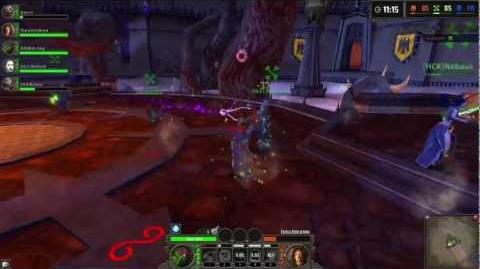