Ruthless on the battlefield, Drulg is a real Juggernaut. As expected from an Ogre, he has an unquenchable thirst for bloodshed as he smashes his way through the fights while breaking the bones in his way.

Restless by nature, most Ogres earn their way as bandits or as part of a mercenary tribe. Each tribe is led by a Tyrant; the biggest and baddest Ogre around. Biggest and baddest that is, until the next challenger appears. As nearly all would-be Tyrants, Drulg won his moniker 'Kineater' in the guts out challenge that resulted in his ascension to tribal leader.

Faced with a much larger and more experienced opponent, Drulg's single advantage was an innate knowledge of how the reigning Tyrant thought. He was, after all, Drulg's father. To the dismay of all those present, the bone breaking battle reached its conclusion all too quickly with Drulg launching his way across the pit to latch onto his opponent and begin gnawing his way through the gut of his sire. It was an audacious move. One which no one had expected to see. Least of all his father.

Though the Tyrant successfully gouged out one of Drulg's eyes, the pain was no deterrent to the voracious Ogre. In fact his reputation as a 'kineater' has served him well. For any Ogre Bulls contemplating a challenge must first be willing to deal with his ruthlessness in the pit.

Unlike his sire, Drulg was not willing to spend his years leading a nomadic existence preying upon small farms and villages. The newly minted Tyrant, eager to capitalize on the skills which had won him his first Guts Out contest, soon embarked upon the mercenary path. It wasn't long before Drulg's Bonebreakers, as the tribe became known, began making a name for themselves. Of course their reputation was drawn in no small part from the utter voraciousness of their captain, Drulg Twoguts.

According to rumor, the iron gutplate resting atop of Drulg's extremely extended belly protect not one but two guts, each with its own distinct needs. One gut, it is said, has an unquenchable third for bloodshed. The other has a hunger so bottomless that Drulg is regarded with fear by other Ogre Tyrants during the annual feasts.

Those entering into a contract with Drulg can be sure of two things: one, the Ogre Tyrant and his mercenary tribe will stop at nothing to accomplish their goal. Two, if even the barest whisper of inability to pay their exorbitant service fee reaches Drulg, he will turn upon his employer with such eager violence that death will be the very least of their worries. 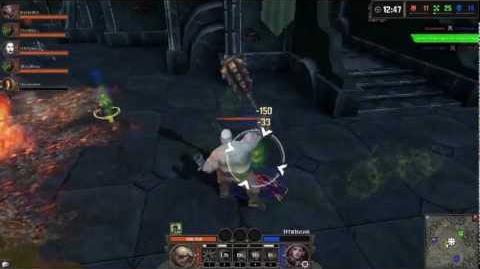