Edit
watch 01:40
The Sandman Will Keep You Awake - The Loop
Do you like this video?
Play Sound

A Warrior Priest of The Empire's army, Conrad is eager to enter the fights, bringing pain to his enemies and support to his allies.

The followers of Sigmar Heldenhammer who employ both words and steel are known as Warrior Priests. The martial prowess of these formidable warriors is second only to their unquenchable faith in Sigmar; faith which has the power to inspire their comrades in arms, bringing forth hope when all seems lost. A Warrior Priest embodies unshakable courage, honor, and faith, standing against the enemies of the Empire wherever they are found. For Conrad Gottschalk, 'Hammer of Sigmar' there could be no other life.

The third son of a prominent Altdorf family, young Conrad was more given to quoting the strictures of Sigmar than engaging in the questionable games of youth. Not all of his childhood was given to seriousness, however. His brothers quickly learned that engaging in certain activities could rouse Conrad to a quivering fury. This inevitably led to the severe beating of said brothers and Conrad's entrance into martial training far earlier than anyone had suspected.

Conrad approaches battle with righteous fury. His ability to draw upon his faith as both weapon and shield is something upon which compatriots have come to depend.

As a member of the Order of the Silver Hammer, Conrad's responsibilities do not end on the battlefield. Like his brethren, Conrad wanders the Empire, employing both martial skill and common sense to guard the Empire against the corruption. Indeed his willingness to aid and advise the common folk has earned him both the amusement and disapproval of his Sigmarite brothers.

During what should have been an uneventful pilgrimage to the Temple of Sigmar in Black Fire Pass, Conrad was called upon to aid a local priest in uncovering the source of some troubling claims. A well had gone dry and livestock were missing. The single person unaffected happened to be an eldery widow living on the edge of the village. Unsatisfied with the superstitious reasoning behind the accusations, Conrad pushed for further investigation; at one point standing between the woman and a mob of villagers determined on letting 'Sigmar sort 'er out.'

Had the woman in question truly been suspected of wrong doing, things would have gone poorly for Conrad. As it was, the situation was as much due to laziness as superstition and no official charges had been brought. In due course the alleged witch was cleared of all wrong doing and Conrad departed the area with the newly minted reputation as a 'Warrior of Truth'. 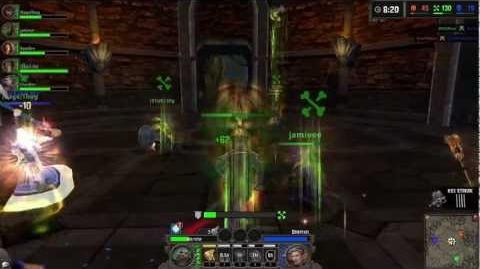